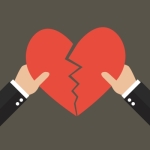 Breaking up is hard to do. Especially if the numbers don’t add up. Which is precisely why Sears is dumping Whirlpool along with all of its other brands including Maytag, KitchenAid and JennAir. According to Sears, “Whirlpool has sought to use its dominant position in the marketplace to make demands that would have prohibited us from offering Whirlpool products to our members at a reasonable price.” Which I guess is Sears’s way of telling everyone that Whirlpool really just needed to get over itself because it felt people weren’t going to pay a lot of money for appliances that don’t say Wolf on them. If you know what I mean. And I think you do.  And just like that, a one-hundred-year-old relationship was brought to its knobby knees.  In case you were wondering if this breakup had anything to do with Sears’s own fiscal woes, you’d be mistaken.  After all, you can still walk into your local Sears and pick up a very fancy schmancy Bosch or LG appliance. And while Sears stock took a 3% hit today on the news, Whirlpool’s stock fared worse with investors sending the stock down over 10%.As for Whirlpool, while the company did report disappointing earnings, it can’t really point the finger at Sears, since the beleaguered retailer was only responsible for 3% of Whirlpool’s global sales.

Could it be that the unstoppable, unflappable Amazon is actually getting stopped and flapped? Apparently, that’s the case as it goes up against Target and other major big-box retailers, not in the online arena, but in the real estate realm. Of course Amazon’s A-game is in its e-commerce, but it’s the big box retailers that have the advantage when it comes to brick-and-mortars. Just ask Whole Foods, who can tell you a thing or two about trying to find a place to call home. You see, it all boils down to leases. Think of a co-op board, except the president of the board in this case tends to be big companies like Target, Best Buy and Bed Bath & Beyond, among others. Those guys get a lot of say in who moves into their malls. And because Target and friends are paying the biggest amount of money in leases, they get to make all sorts of demands, like who is and isn’t allowed to move into a particular mall and under what conditions they can move in. Now that Whole Foods calls Amazon its boss, it’s finding it challenging to get into new locations if there are already other big retailers installed that find themselves competing with Amazon. See how the tables have turned?

If you used a Post-It note today then you helped contribute to 3M’s third-quarter boffo earnings. All those office supplies and little pieces of paper may not look like much but they raked in $8.2 billion in sales with a profit of $1.43 billion that added $2.33 per share. That profit, by the way, was an 8% increase over last year’s profit at this time. But in all fairness, the company’s not just about it post-it notes and tape. The company also makes industrial coatings and ceramics and those items bring in big money. The stock itself is up over 30% in the last year and today’s news sent shares up the most in eight years. Crazy, I know. It also helps that two-thirds of 3M’s sales come from overseas. So even when there’s a strong dollar working against U.S.-based business, a company that earns a majority of its money outside the country is able to hold its own very well and can offset losses. The icing on the cake, for 3M anyway, is that the company beat Wall Street’s expectations. And who isn’t a sucker for a good Wall Street beat?