There are around 265 million Visa credit and debit chip cards floating around that have been providing some much needed security. Big merchants who upgraded their terminals for chip-enabled cards have noted an 18% decrease in fraudulent activity.  Five of the 25 biggest merchants who were not chip-enabled actually saw an 11% uptick in fraudulent activity. And while everyone is happy about the added security, both merchants and customers don’t care for the much longer transaction times. But now Visa finally finally made some improvements to its software with a “Quick Chip” upgrade. The new upgrade is expected to reduce wait times and shave off about 18 seconds from transactions times. Instead of dipping your card in the terminal and waiting a number of endless seconds until the terminal angrily beeps that you need to remove your card, you’ll dip it in and take it right out in two seconds. Wal-Mart also took cues from disgruntled customers and figured out a way to shave 11 seconds of their transaction times: by skipping the prompt that asks shoppers to confirm the transaction amount. Not sure how I feel about that one.  If you recall, merchants had to meet a deadline last October to upgrade their terminals. If fraudulent activity occurs, the merchant now has to pony up and banks are now OFF the hook.

Netflix is in 190 countries and can be accessed from just about everywhere. The company gleefully announced that it picked up 6.74 million new subscribers in its latest earnings report and its total subscriber-ship is hovering at 81.5 million paying viewers. The streaming video service has even managed to produce more original content than HBO  and figures that by the end of the year, it will have 600 hours of original programming under its belt. But that’s where the fun ends because today the stock fell 11%, experiencing its biggest same day drop in eight months, falling to $95.84. Investors are super-curious and worried about Netflix’s growth plans after giving the disappointing news about the amount of new subscribers it expects to gain…and lose. That’s right. Netflix expect some people to drop out and dare I say it…not lay their eyes on another episode of Orange is the New Black once subscription prices go up. Oh well. You win some, you lose some. The company is thinking it’ll add only about 2.5 million subscribers next quarter, and expects just 500,000 of them to be in the U.S. Then of course there’s all that competition from Hulu and Amazon. Because, after all, its not enough for Amazon to dominate e-commerce. More than eight brokerages decided that maybe now is a good time to announce that their target price for Netflix stock is going to get somewhat smaller, with the average price target coming in at $123. However, with all that bad news, Netflix still has big plans to surpass 100 million subscribers…by next year. 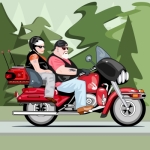 Harley-Davidson (HD) bikes might carry major street creed but its earnings tell a whole different story. The legendary motorcycle company just posted its earnings and well…they just weren’t as impressive as the product themselves. HD took in a $250.5 million profit, picking up $1.36 per share, but this time last year the company earned way more, topping out closer to $270 million and adding $1.27 per share. Analysts, by the way, only expected $1.29 per share to be added. That 7.2% year-over-year decrease had Wall Street scratching its head. At least revenue was up 4.8% to $1.75 billion from last year’s $1.67 billion. But while increased revenue is a good thing, HD’s .5% sales decrease in the United States is most definitely not. The company sold only 35,326 bikes in the United States and lost some market share to competitors, especially Polaris’ Indian Motorcycles. Apparently, Harleys have failed to attract younger consumers (read: milllenials). However, globally, Harley Davidson fared much better, selling 57,458 bikes, and expects to sell a total of between 269,000 and 274,000 bikes for the year – which is more than what was initially expected. Harley-Davidson graciously explained that “retail sales trends have significantly improved.” Which seems to be true, at least for Polaris, who has taken a big bite out of Harley-Davidson’s market share.

Maybe membership does still have its privileges. AmEx is trying to make a comeback following its breakup with powerhouse retailer, Costco, and rumors of an impending break-up with JetBlue. To soothe it’s broken fiscal heart, the company is making plans to offer a rewards program called “Plenti.” Catchy, huh? Joining forces with Macy’s, Exxon, RiteAid, AT&T and a few other companies, AmEx is offering a loyalty program where American consumers get to cash in points earned on their AmEx cards, and then redeem the points at these retailers. I say Americans, because AmEx already has loyalty programs in other parts of the world, including Germany and Italy. Fill up your car at Exxon and then run over to Macy’s and buy yourself a shirt. Or some vitamins at RiteAid. Or insurance. Yes, I did say insurance since Nationwide Insurers is one of the partners. As is Hulu. Cool, huh? . Noticeably absent from the list of participants is a national grocer and home improvement retailer. But fear not, oh faithful spender, as rumor has it those slots are just about to be filled. If you’re wondering how AmEx benefits, it’s simple: AmEx gets a fee from its partners-in-retail. Clever indeed.

GM is coming to a screeching halt in Russia after taking a 74% hit in sales there with an 86% hit on its Opel brand alone. Hence, GM has put the kibosh on Opel production altogether and will be drastically slowing down production on its Chevy lines, chalking it all up to a $600 million loss. The collapsed ruble and dropping oil prices have dealt a major blow to the Russian economy, with car sales especially down 38%. So GM decided to make a run for it. However, if you find yourself in Russia and jonesing for a Corvette, then no worries. Because Corvettes are imported, they will still be making their way into the country, together with Tahoes and Camaros. Can’t you just picture Putin cruising the Kremlin in a Camaro? Oddly enough, or not, the automobile company is still looking to up its Cadillac game in Russia. The luxury auto has yet to catch up to the popularity of European automobiles BMW and Audi. Tragically, only 72 of them have been sold in Russia in the first two months of the year.

FedEx released its earnings report, regaling Wall Street and the world with news of its prosperous third quarter. One of the fiscal highlights was the $11.7 billion in revenue the company took in. Not a major difference than what experts forecasted, and a modest 4% gain over last year, but the number did hit its target so nobody was necessarily complaining on that front. The big exciting numbers, though, came courtesy of FedEx’s impressive profits. At $580 million and $2.01 per share, the company’s net income was a whopping 63% higher than last year at this time. Analysts only predicted a profit of $1.88. It’s kind of nice when analysts are wrong. Just saying. And for that very impressive feat, FedEx can thank low fuel prices. Of course there were a few other reasons too, but fuel could definitely be crowned the star of this one. But then its shares took a bit of dip today on the news of its less than impressive outlook. The company expects to pull in between $8.80 – $8.95 per share for the year but analysts much prefer to see $8.98 per share. FedEx’s performance tends to hint to Wall Street what we can expect from our fickle economy. So if FedEx is feeling a bit too fiscally modest and only moderately ambitious, it makes The Street a little edgy.