While you were busy navigating mall parking lots trying to find a parking space so you could do some meaningful Labor Day shopping, Media General was also busy doing some shopping of its own. The media company picked up, or merged – as it’s being called – with Meredith Media to the tune of $2.4 billion. The new company to be borne out of this merger will be called Meredith Media General – how convenient – and will take its place as the third largest television station operator in the U.S. Media General is gaining an additional 17 television stations, bringing its grand total to 88. Meredith also brings with it some great poolside reading, including Better Homes and Gardens, Shape and Parents magazine – the ultimate publication that lets parents know they are doing everything wrong. The deal was done for $51.53 per share, a generous 12% premium from Meredith’s Friday closing price of $45.94. While the boards of both companies approved the deal, the FCC must also gives its blessing for this union, which is estimated to rake in $3 billion in annual revenue. And here’s a little fun fact: Meredith Media began in 1902 as an agricultural publisher. Who knew?

Fit to be upgraded…

Nothing says fit like having your stock upgraded by Morgan Stanley to overweight. Oh the irony.  Morgan Stanley had initially classified the stock as equal weight as in, it’s right where it belongs. But alas! Morgan Stanley has been noticing how Fitbit has been performing really nicely lately, fiscally speaking of course, and expects the maker of the wearable device to outperform aka overweight. That is a finance term, I kid you not, which also can mean (and does in this instance) outperform. And who does’t love a stock that is overweight and outperforms? Hence, the stock rallied today. In fact, Fitbit had its biggest jump today since June, when it debuted at a relatively modest $20 per share. Second quarter revenue tripled from a year earlier to over $400 million, compelling Morgan Stanley to revise Fitbit’s target price from a paltry $43 per share to a handsome $58 per share. And it’s no wonder since Fitbit has a staggering 21% piece of a a $10 billion industry. As for that little company we call Apple, it appears that wondrous watch they peddle isn’t swaying those Fitbit wearers, many of whom have decided against purchasing that ever wondrous piece of technology. Fitbit’s stock price, btw, hit $34.77 and closed today at $35.49.

An ice cold one…

Because it’s the thing to do, Heineken is adding to its stash of beer selections by welcoming craft brewery Lagunitas Brewery to its foamy fold. Apparently craft beer is the new black and has been growing at a steady clip compared to its less craftier counterparts, whose growth rate has slowed considerably. In fact, one out of every ten beers is a craft beer. Clearly it’s all the rage. Lagunitas’ beverages, most notable for its India Pale Ale, are reputed to be so tasty, that the company shipped out 600,000 barrels just in 2014. Unfortunately, now with Heineken taking a 50% stake in Lagunitas, the California-based beer company no longer gets to sport the craft brewer status. In order to be classified in that illustrious category, a company must be less than 25% owned or controlled by a larger brewer. Oh well. But at least with Heineken buying it, Lagunitas gets to spread its foamy wings and bring its tasty ales to other parts of the world that have yet to experience the joy that is…Lagunitas.

The consequences of actions…

Indiana’s economy just might tank but…oh well. Ever since its Governor Mike Pence signed the Religious Freedom Restoration Act six days ago, basically giving businesses a “license to discriminate” against gays, lesbians etc…corporate CEO’s, businesses, politicians and celebrities have gotten involved, mostly to voice their anger and disgust with the action. Nine CEO’s wrote an open letter to Gov. Pence over their objections to the bill. Apple CEO Tim Cook called it a “very dangerous … wave of legislation.” Indiana literally ticked off Apple. Is there any state that would want to be on Apple’s bad side? Seriously. Angie’s list had plans for a $40 million expansion in Indianapolis. That’s on hold over this bill, as well. The NCAA is majorly “concerned” and analyzing the situation carefully, wondering what to do ahead of next week’s Final Four. Several mayors have already banned city-funded travel to Indiana and 49 governors nixed unnecessary travel to the state. Hashtag #BoycottIndiana has been making the rounds getting upwards of 200,000 hits. Seeing as how the backlash has only gotten precipitously worse, Gov. Pence said he wants a clarification and a fix. Just so we’re clear, that doesn’t mean he wants to get rid of the bill. Perhaps once the state’s economy is in the toilet, he might reconsider.

It’s time to welcome GoDaddy to the ranks of the New York Stock Exchange. The web-hosting, domain name registration company just came out with its IPO this morning to a much larger than expected debut. Under the ticker symbol “GDDY,” GoDaddy offered up 23 million shares at $20 a pop. But then, lo and behold, it opened over 30% higher at $26.15 per share. Not bad for a company that’s not profitable. Yes, I did just write that. GoDaddy took a net loss of $143.4 million in 2014 and also has about $1.5 million in debt. To be fair, however, the company’s revenue went up 23% to $1.39 billion. This is not the first time the eighteen year old company attempted an IPO. Back in 2006, Go Daddy was all set to make its big Wall Street debut, only to then decide otherwise, saying the market was in a bad place. However, there are those who think there were internal factors and management shake-ups that affected GoDaddy’s decision to go public. If you’re wondering who the next pretty face will be to grace the company’s campaigns, don’t bother. After stints with race car driver Danica Patrick and Israeli supermodel Bar Refaeli, the company is looking to revamp its image. 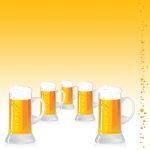 Samuel Adams is out. Yuengling is in. The Brewers Association has crowned Pottsville, Pennsylvania’s Yuengling as this year’s number one craft beer, taking out the Boston Beer Co. who makes Samuel Adams. So how did America’s oldest brewery finally manage to nab top honors? Actually it had nothing to do with anything the beer companies did or didn’t do. Rather, the Brewers Association slightly altered the criteria for what can be considered a legit craft beer. It gets technical so I’ll leave the complicated stuff to a beer-savvy blogger. What I can tell you is that Yuengling was considered a non-traditional beer, because corn is one of the ingredients used to brew the beer, and therefore not eligible for the beer crown all these years. As for overall U.S. brewers, Anheuser-Busch, Miller-Coors and Pabst took the top spots. Yuengling and Boston Beer Co. rounded out the fourth and fifth place spots. Unlike regular beers, craft beers sales are up and have a 19% hold on the beer market. In 2014, $19.6 billion worth of craft beer was sold, up 14% from 2013.