Oh consumers, how you’ve been spending. It’s always a good thing when Americans spend spend spend. The economy grows and everyone is happy…sort of. Yes, the economy did grow by a mere .3%. And that does make Wall Street spend-happy. But the big question is on what exactly have consumers been spending their hard earned money ? The answer: Services. Not services for your Tesla or on mud facials and goldfish pedicures but rather services that provide you with electricity and water. Yes, the bulk of consumer spending lately has gone toward paying utility bills. Not exactly riveting stuff but at least it’s something. 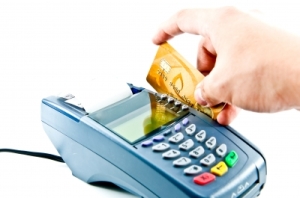 Two of the biggest companies this side of the Atlantic are about to go at it and things will get ugly. Mega retailer Wal- Mart filed a $5 billion civil suit against credit card company Visa accusing it of all kinds of naughty things. Wal-Mart says Visa is guilty of violating anti-trust laws like conspiring with banks to illegally fix and inflate swiping fees. Back in 2012 Visa and MasterCard had to fork over $7 billion to settle similar allegations with other retailers. Don’t think this has nothing to do with you. Those fees get passed on to the consumers – and have been costing a mind-blowing $350 billion – none of which can go towards paying utility bills.

Remember the time we had those rally great BlackBerries?

Maybe the only blackberries you’ve been into lately have come from the produce section but remember the smartphone BlackBerry? Remember how having one virtually guaranteed your place in the universe? Nowadays having a BlackBerry may still determine your place in the universe – only it’d be at the wrong end. My how the tide has shifted.  Big news from the company, however. Wall Street predicted they’d lose $0.56 per share but wouldn’t ya know it – the company only lost $0.08 a share. Boom! And wouldn’t ya know it again? Shares of the stock started to go up because the analysts’ prediction was so far short of accurate. Double boom! CEO John Chen put in some new cost-cutting measures trying to morph BlackBerry into a software company while scrapping the smartphone component. Sadly, for BlackBerry anyway, it was the first time since 2007 that the company’s revenue fell under $1 billion.